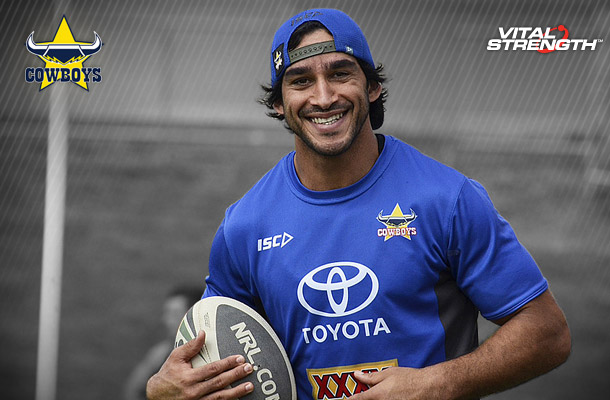 Now in his successive 10th origin season Johnathan Thurston is a veteran of the game. Get JT’s inside word on Origin Camp in 2014.

Cowboys half back veteran Jonathan Thurston is the only player to have played in all 27 games of Queensland’s eight-year State of Origin winning streak from 2006–2013.  Now, in his successive 10th origin season, Thurston knows the recipe for success and it starts well before the kick off whistle. We chat to Johnathan about origin camp in 2014.

Vitalstrength:  Who do you think are the stand out players of this series?

Johnathan Thurston:  Obviously NSW have done very well with Jarryd Hayne always being a handful and Josh Reynolds and Trent Hodkinson doing well in the halves, especially as rookies. You don’t win these games without everyone making a big contribution, however. We’ve been so close in both matches but just haven’t managed to finish the job off which is disappointing.

“Eight series wins in a row is a great achievement to look back on and I’m very proud to have been a part of this team.”

Vitalstrength:  After a bruising 80 minute origin battle, then backing up for the Cowboys on the weekend how do you speed up your recovery? 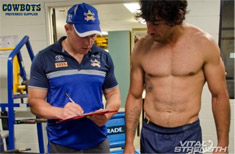 Johnathan Thurston:  These days recovery is underway as soon as the game is over. We head in for some stretching, some warm down time on the bike or treadmill, more stretching and then a stint in the icebath. Origin time is such a strenuous time of the season with the guys backing up after matches that everything is done to get the body back in order. After game two, I had a game only a couple of days later and that was a huge challenge. You do all you can with the physio, get as much rest as you can, feed your body and only do the very basics, if anything, at training.  To help maintain muscle and recover faster I also take Vitalstrength Rapid Protein and Glutamine between games.  Recovering fast enough between games is just about the hardest part of being a footballer.

Vitalstrength: What is a standard day of eating in Origin Camp?

Johnathan Thurston: We’re really well catered for. There isn’t anything the boys need that isn’t available. Breakfast, of course, is the most important meal of the day to get us ready for training and the buffet gets a real workover. There’s lunch (stir fries, wraps with a variety of meals to choose from, pasta, salad, some fruit) and dinner (a really good variety depending on where we are), occasionally an afternoon snack.

Vitalstrength: There a few big boys in the QLD Origin camp, whose the biggest eater?

Johnathan Thurston:  All the forwards give it a good work over. You just sit back and watch them go at it. They’re big lads with big appetites. They’re good though – they always make sure there’s plenty left for us backs. Someone like Matt Scott loves his food more than just about anything else (apart from his wine collection)

Vitalstrength: Being your 10th origin series, how have things changed in Origin camp with nutrition and diet?

Johnathan Thurston: I guess the biggest change is that now we have so much more information on what the right things are to eat and take when you’re preparing for training, the day of the game and straight after it.   We have a specialised supplement and nutrition plan and it’s all carefully planned and monitored now compared to my first Origin game which is almost 10 years ago. Like most things in the NRL, it’s all more professional and each year we see changes.

Vitalstrength:  Most people would recognise that weights, cardio and ball work make up the bulk of your training in Origin Camp but what other forms of exercise do you do while away?

Johnathan Thurston:  Definitely playing golf is high on the priority list for a few of us. We gave the Coolum course a good working over when we there for the past few years and now we’re based at Sanctuary Cove that has two great courses. We use carts to get around but it’s still good exercise and good to be out in the winter sun in Queensland. Most of our days start with a dip in the pool to get us going. It’s cold but necessary unfortunately.

Vitalstrength:  How do you spend your downtime while away?

Johnathan Thurston:  Playing ping pong with the boys, watching movies and sleeping as much as possible ( I need to get in as much sleep as possible while I am away from my baby girl)

Vitalstrength:   Knowing you’re a bit of a practical joker what is the best trick you’ve played on the boys during an Origin camp?

Johnathan Thurston:  Messing up Tatey’s room is always a good practical joke as he takes it quite seriously so you get a good reaction. Other than that, we like to swap players room keys for blank ones so they can’t get into their rooms and small silly things like that.

Vitalstrength:  Who are you sharing a room with this series? And how is that going ?

Johnathan Thurston: I’ve had two roomies this time around. Game 1 was Matty Scott which was great because we’re very good mates in Townsville and always enjoy each other’s company. It’s rare for us to be roomies though because we don’t do it for the Cowboys when we’re on the road. Then for Games 2 and 3, I was back with my long-time Origin roomie Sammy Thaiday. Things are a bit different now than in the early years because we’re both older, wiser and have families. We’ve slowed down a bit off the field but there’s still plenty of pranks. It wouldn’t be the same if I didn’t get to spend some time with Sam in the middle of the year. He’s a great bloke.

Vitalstrength:  What is your best Origin memory?

Johnathan Thurston: I remember the try the King, Wally Lewis, scored to win a game at the SFS. He just couldn’t be stopped. He had that desire to get to the tryline and nothing was going to prevent that from happening.

Vitalstrength wishes Johnathan Thurston all the best for the third game of the 2014 State of Origin Series at Suncorp Stadium tonight.