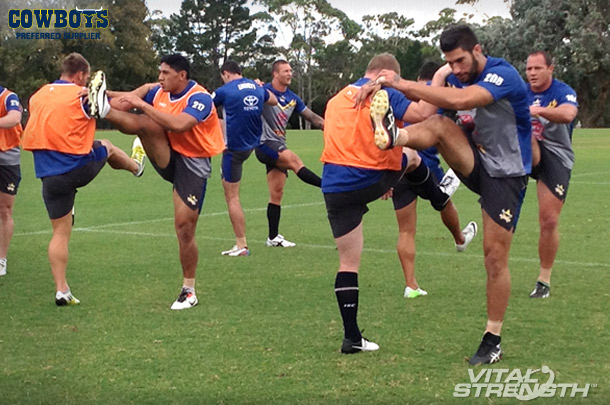 If you watch any NRL game on the weekend you will find that every man on the field is built like a tank!

A finely tuned tank that must be lightning fast, strong, agile and near-indestructible.  There are many components of fitness that must be assessed throughout the season to ensure that players achieve optimum results on the field. Body mass is one of key factors that varies dependant on the players position and size.

We asked Cowboy’s High Performance Manager, Paul Bowman for his insights on the ideal lean body mass for professional rugby league players and how this is monitored and maintained throughout the season.

The body mass of this group ranges from 103kg to 114kg in the NRL squad with an average of about 109kg. These players play in the middle of the field and do the bulk of hit-ups and tackles so need extra mass for momentum. The players must be conditioned to carry the extra weight but usually get interchanged the most as well. To highlight the difference in weight the lighter player at 103kg is shorter, very strong and has good leg speed enabling him to be effective at a lighter body mass.

The Cowboy’s NYC front rowers range from 98kg to 105kg with an average of about 103kg. For these younger players, specialised nutrition and weight training is important to increase their lean body mass. Most players use Vitalstrength Rapid Bulk to help gain muscle mass and size.

This is a sum of 8 skin fold sites:

Back rowers typically play 80 minutes and top the tackle counts. They also need to be agile to defend on the edges where the quicker players attack. Body mass of this group ranges from 93kg – 106kg with the average around 102kg. The lighter players are generally the players that play 80 minutes.

It may make a big difference to a back rower to be 94kg instead of 92kg with his skin folds 75mm instead of 55mm. Those extra 2kg make a big difference to his ability to absorb punishment and be effective when hitting the ball up due to the extra momentum that those 2kg can add. Vitalstrength Rapid Bulk would be included in this players program to accelerate growth results.

The body mass of halves and hookers ranges from 82kg to 93kg with an average of about 88kg. These players are typically the lightest and leanest because they play the whole game and cover the most distance in the match – up to 9km.

Body mass ranges from 86kg to 101kg with an average of about 96kg. Heavier players are typically centres who take a lot of runs like an extra forward and do plenty of defence.

Weight and skin folds are recorded at the start of the pre-season, pre and post-Christmas, before the start of the regular season and then during the season for players with weight concerns.

Paul comments that skin folds are very individual and specific targets are not set for players but they are guided by the typical ranges that their position dictates. There are always exceptions to every rule though! His philosophy is provided the players can do everything asked of them on the training field, in the gym but most importantly on the field, then their skin folds are not an issue. If players can’t make fitness targets and are struggling with consistent effort on the field, if their skin folds are determined to be too high then they will be tested regularly and given targets to achieve. Any player over 100mm would really need to look at their diet and lifestyle to reduce body fat.