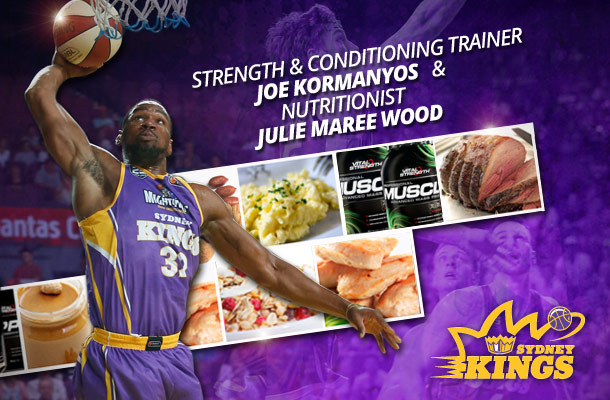 The play-offs are approaching in the NBL and a player’s diet and conditioning needs an adjustment.

Sydney Kings strength and conditioning trainer, Joe Kormanyos and their nutritionist, Julie Maree Wood, in consultation with Vitalstrength have formulated a programme that will ensure the players are in the best possible shape.

“We have to ensure they don’t burn muscle,” said Kormanyos. “Physically they are at their peak right now, they’re very lean, so we have to monitor them closely so they don’t become too light.”

The danger for basketball players at this crucial end of the season is that they could use up all the calories their bodies store and then burn muscle, which would affect their fitness and stamina.

“It largely depends on the amount of court time each player is getting,” said Wood.

“For the players like Ben Madgen, Tom Garlepp and Sam Young, who are playing a lot, they are being told to eat more carbohydrates through foods like brown rice, wholemeal bread and potatoes.”

These are the foods that help players maintain their muscle mass and prevent their body from delving into their muscle stores, which in turn prevents them from losing weight.

The Kings are playing five games in 14-days to close out the regular season, then they’re straight into the play-offs.

“In the first round of the play-offs we’ll be playing up to three games in six days,” said Kings forward, Tom Garlepp.

“And if we win them, then less than a week later, another three games in six days in the grand final series.” 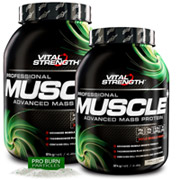 So it’s a hectic schedule over the next month and their diets will play a crucial role in performance week on week.

By increasing their intake of Vitalstrength Pro-Muscle Protein the players are able to maintain their muscle capacity.

“I’ve instructed all the players to now take their protein supplement in the morning as part breakfast, and at night,” said Kormanyos.

“I have six meals a day,” said Garlepp, “I have the normal breakfast, lunch and dinner, but I also have something after training, in the middle of the afternoon and a late night snack.”

Here is a typical daily diet of Tom Garlepp:

“Basically we want them to top and tail their day with the protein supplement,” said Wood.

The Sydney Kings have been using Vitalstrength’s Pro-Muscle Protein all season, but monitoring a player’s body and the needs placed on that body as the season progresses, means the value of the nutrition and supplement programme becomes so important at the end of a season, when there’s so much on the line.